If you aren't familiar with Age of Empires, check out the my other AoE2 project where I provide a bit more of an intro. Otherwise, read on.

Watching people do things and guessing their skill level is a fun game.

Imagine if you could somehow disguise baseball athletes at all levels and just watch them play. Would you you be able to guess whether they were little leaguers, High-A Asheville, or the Boston Red Sox?

The fame and the physiological qualities of the baseball players make this pretty much impossible, not just for baseball but for most classical sports. However, for e-sports, it's a whole different ball game.

Computers and networks can hide identity. In these cases, you really can't tell how good somebody is until they start playing.


I've seen at least a couple streamers try to play this "Guess the Skill level" game for Age of Empires II.

From what I've seen, people playing this game have gone about selecting a "random" match to spectate and guess in one of two ways:

Fortunately, these are very solvable problems. Using the aoe2.net API, in about a weekend, my wife and I WIPed this up: 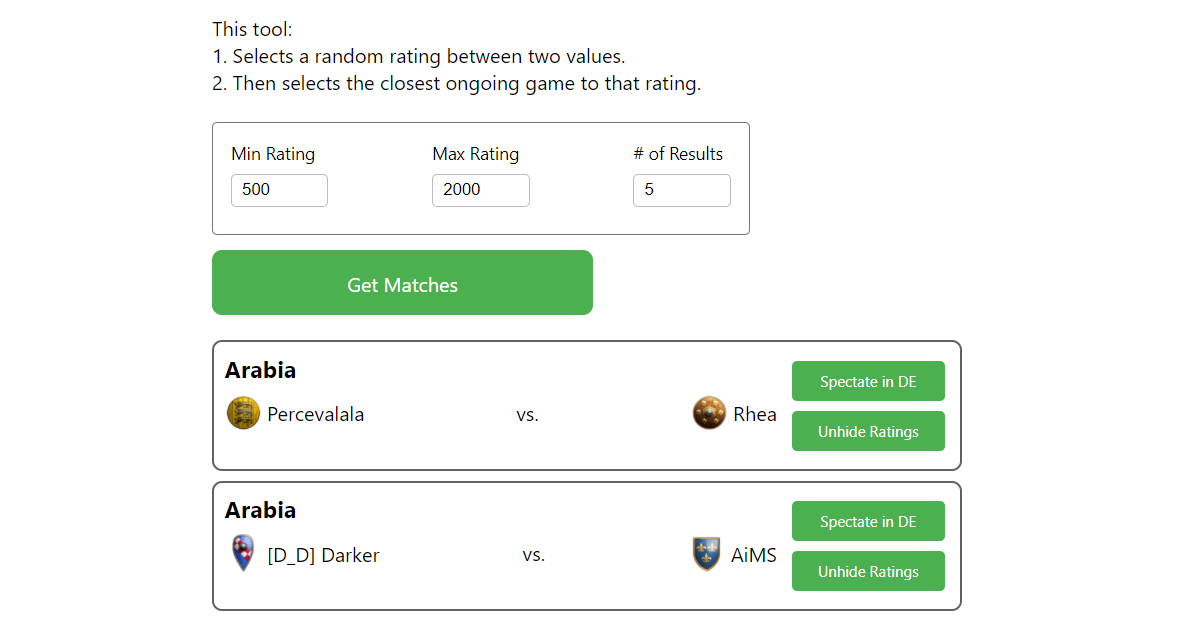 In doing so, it ensures that you are in for spectating variety of different skill levels, instead of getting more of the skill levels that play more games. It'll keep you on your toes so you can't just keep guessing the rating "1000" over and over and expect to be right.

The best example I know of a Twitch streamer playing this game is Hera's Guess the Elo series:

I shared this tool on his Discord and his mods were nice enough to pass it on to Hera:

This is a React app. It's hosted on GitHub pages. Since aoe2.net doesn't allow cross origin requests (via CORS), there is a small backend system: a GCP cloud function that proxies the "get all ongoing matches" request from your browser to the aoe2.net API. There is also a caching mechanism that stores the most recent API result in a storage bucket for a few minutes. This caching mechanism is a good idea because:

It doesn't cost very much to operate (<$1 per month) - so far it's been free because of the Google Cloud Platform free tier (GitHub pages is also free).

I don't currently have any plans to make changes to this tool. But if I had to think of some ideas, we could:

🍕Buy me a pizza